Welcome to Jesmalestiel Tells Tales! Below you will find the various fanfictions I have written over the past few years, split up into series. This includes a few individual works in the Harry Potter, Doctor Who, and Good Omens fandoms, as well as two longer series. You can find summaries including pairings and characters for each story by clicking on the title.

The series A Trio of Tricksters is a collection of Harry Potter stories that includes several stories that can be read in isolation from the main text, so don’t let that discourage you! Though if you do want to read them all there is a recommended reading order.

Similarly, my series Lunar Harmony Through Time and Space is a collection of Harry Potter and Doctor Who crossovers that can be read in isolation, however in contrast to A Trio of Tricksters these can be read in any order because such is the nature of space and time.

I am distressingly aware of the fact that the majority of my fanfiction is based in the Harry Potter universe, and that the creator of that universe, J.K. Rowling, has caused an obscene amount of harm with her words and her actions. As I wrote about on my main website, Words are Weapons. As a nonbinary trans person I cannot abide by what J.K. Rowling has done. I will not advocate for her books. I do advocate for fan creation and interpretation, but I no longer try to bring people into the fandom, I only embrace those who are here and who similarly feel the hurt I feel and who take comfort in the versions of the characters we have developed in our own right. We do not own the story in the legal sense, but we carry it in our hearts. Right now my heart hurts, and writing hurts. I’m still having trouble writing and posting consistently. But I when I do I always do my best to do justice to the characters as I know them and as I see them — through a lens that is ardently and unapologetically queer. Right now fanfiction is the only Harry Potter content for me. Thanks for coming along for the ride.

Works in a series (including related oneshots)

A Trio of Tricksters

Lunar Harmony Through Time and Space 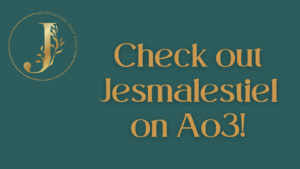